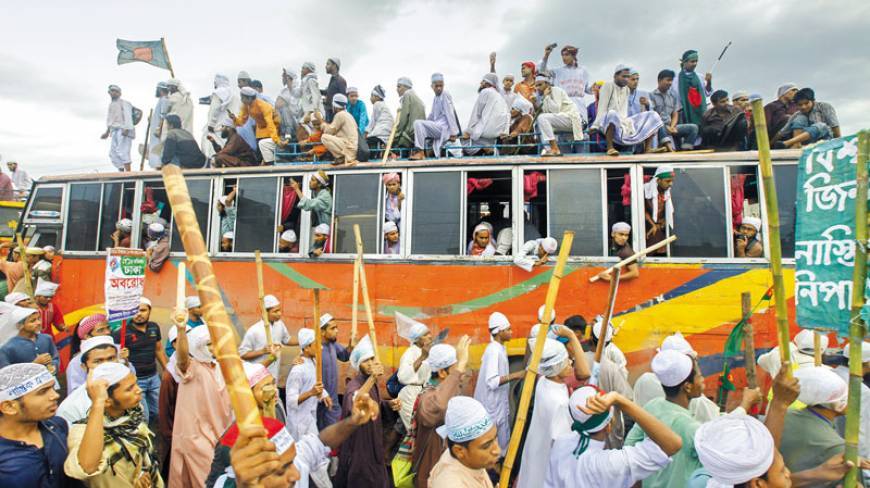 The politics of Bangladesh is in turmoil.

Though people do not see much of violent political programs now, they still do not feel safe because a sense of uncertainty is haunting them. The country is heading for an unknown disaster and anything odd can happen at any time, and that is what is being perceived by most people.

Anxiousness cannot be rejected outright as illogical and a lack of confidence in stability is adversely affecting the economy.

People connected with the present government may not agree with the above. They argue that the government and its chiefs have been making progress for quite some time now.

Since the government is conducting stable politics, the country should not be considered unstable.

In case a country is governed by a political party/chief for a considerable time, the situation can apparently reflect normalcy.

If change does not create disruption in normalcy, the politics is considered stable.

On the other hand, even if a government is changed after continuing for a long time, but normal life is disrupted during and afterwards, politics cannot be considered stable.

In many countries, including ours, the practice of democracy has been accepted constitutionally. Accordingly, a government is to be elected by popular mandate periodically, and as such, peaceful transfer of power is possible.

The activities of the government are to reflect the aspirations of the people. The government is considered strong enough, with public support and legitimacy, not to be toppled in an unusual way with no untoward incidents afterwards. Examples are countries like India, Japan, the UK, the US, most European countries, etc.

Countries like Russia, China, Vietnam, and Cuba, believe in socialism/communism and follow a completely different system for governance and may not be equated with ours.

In a country to be run democratically, if the government is formed in an abnormal manner, bypassing democratic spirit, creates a dearth of accountability.

Good governance and social justice become a far cry. Grievances and frustrations continue to grow. In case the people find no ways of getting their problems addressed, or change the government peacefully, that frustration turns into hatred and violence.

These generally lead to terrorism and may push people towards Islamic militancy in Muslim majority countries. Such a situation tends to deteriorate with the passage of time and the tension among the populace increases. Political stability dwindles and disaster strikes.

When the formation of Islamic militant organisations like al-Qaeda, the Taliban, Islamic State, and such are analysed, it is usually observed that they originate in Muslim-majority countries like Afghanistan, Iraq, Syria, Libya, etc, where the practice of democracy has been non-existent. Lack of accountability results in an absence of good governance and social justice, with no chance of a peaceful way for shifing power.

Some people believe it is also possible that Islam-based political parties or militant groups create undue influence over the poor and uneducated population of Muslim-majority countries through the promise of wealth and enlightenment.

Taking advantage of democratisation, they seize state power through elections and utilise the position to strengthen their militancy.

A good example is the ascension of former Egyptian President Mohammed Morsi and his Freedom and Justice Party (FJP) in 2012.

As a result of a popular uprising that arose independently and spread across the Arab world in 2011 — popularly referred to as the Arab Spring — the autocratic regime of President Hosni Mubarak was overthrown.

Subsequently, a presidential election was held in two rounds during 2012.

Morsi won the election with a narrow margin. He took over as president of Egypt on June 30, 2012.

He was known to be a member of the Muslim Brotherhood, a Middle East-based terrorist outfit, and his political party was considered an alternate face of the same. He was ousted on July 3, 2013 by the Egyptian Chief of Armed Forces Abdel Fattah al-Sisi, amid an uprising.

Mr Sisi launched a bloody crackdown that left 1,400 dead and 16,000 detained. He took over the position of president in 2014. Democratic process had been discontinued, with basic human rights and freedom of expression curtailed.

Influential Western nations are supporting the regime. It seems they have accepted suspension of democratisation and use of force for elimination of pro-Islamic political parties with militant connection as an option for curbing Islamic militancy.

The present situation in Bangladesh is not normal, as I’ve already mentioned. The curtailing of democratic practices, human rights, right of expression, and restricting political activities are all being justified in the name of fighting militancy.

The government and alliance members in power have taken one side, while the rest of the people are placed in the opposite. Those people have their sorrows, pain, and grievances, but they do not find any effective ways to express their grievances.

Our existing political parties, except the ruling one, have been subjected to tremendous pressure from the government and are made ineffective. Thus, a political vacuum has been created.

The expectation is to have an effective political party. If the aspiration of the people cannot, or are not, allowed to be fulfilled, Islamic radicals and terrorist outfits may find space to fit in the void. The rise of Islamic militancy would be the only logical consequence in such circumstances.

Re-establishing democracy is the way. The first step would be to hold a free, fair, and acceptable election.

The constitution may be re-examined and necessary amendments initiated to improve our democracy. When people feel they have regained ownership of their country’s success, curbing militancy will be easier and ensured. The future remains uncertain otherwise.

Read This News at