Student politics in Bangladesh: Past, present and future 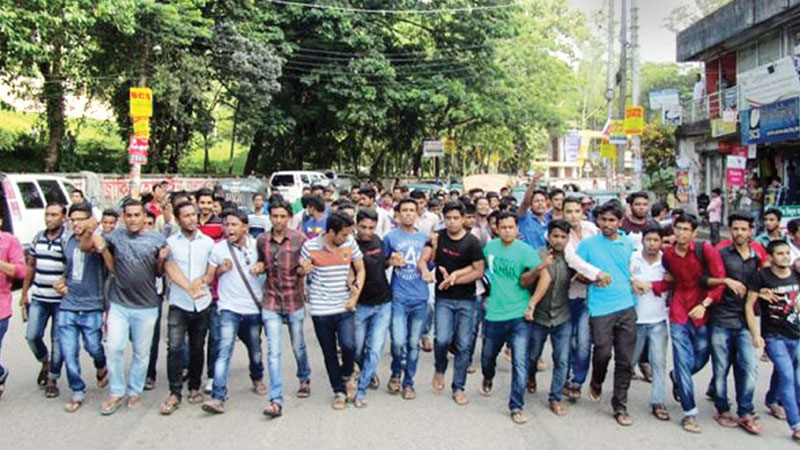 During any national movement student organizations used to play an important role. Not only were they a deciding factor they were the pioneer in many occasions

Student politics in Bangladesh has a glorious past. It has a proud history of struggle and of supreme sacrifice for national cause. During rule of Pakistan government, this territory presently called Bangladesh was a part known as East Pakistan. Student community at that time was found standing beside not only for the cause of students but also for the oppressed people or for any other greater national concern. Student politics was vibrant with pro-people activities which were acceptable and popular even to general mass. People had the confidence that students were patriotic and were capable of contributing positively in resolving public crisis.
Student politics at that time used to be led and regulated from within the students. Leaders for any student party/union used to be elected by members democratically who gave headship to their own group. In case some alliance was formed and directives used to be issued from a combined leadership consisting of all leaders of parties in coalition. Individual student front or its leaders in many cases did have fascination towards certain political organization. They used to value their opinion, advice and guidance. But decision making and implementation used to be absolutely within the domain of students own forum.

Student leaders were answerable to general students for their activities and also to an extent to general public. Student politics were mostly selfless and beyond partisan interest. Its aim was confined within waging movement for establishing legitimate right and serving the greater cause of nation.
During any national movement student organizations used to play an important role. Not only were they a deciding factor they were the pioneer in many occasions. They showed path subsequently being followed by political parties. History is the witness.
During sixties, Monaem Khan, the then governor of East Pakistan a crony of military junta led by Ayub Khan, created National Students Federation (NSF), a student organization. It was sponsored by government and served government purposes. Its function was mainly to counter general people. Leaders and members of this organization under the protection of administration used to involve themselves with corrupt, anti-social and criminal activities to fulfill self and group interests. Student community never accepted them. They could not gain trust of people and were hated. NSF met its natural extinction at the beginning of the war of liberation.
Students’ politics of our country took a sharp downward trend after independence. Student organization which used to follow the ideology of the party, that led the war of liberation and ascent to power after freedom, took up the character of NSF. The trend continued afterwards. Similar student fronts were formed by subsequent government party spending money from public exchequer. Student front made were run and regulated by the political party and not by the students.
The idea seemed to be to use them as muscle power to suppress people’s demands, to facilitate illegitimate and corrupt practices of party people. Corroborating the purpose, the members and office bearers of this type of student front did not need to be necessarily students not to speak of having ideology or patriotism. They were chosen from youths who could be good in violence. Most of the time they were to be seen as anti-people and considered as corrupt oppressor by public.
Unfortunately, the political parties out of government did not make any effort to improve the situation. On the contrary, they also started following the existing trend and create their own student front in the same way to counter party in power.
Students lost control over main stream student politics. Student politics no more could ensure safeguarding interest of students. Defending rights of people even risking life for that were no more seen. In contrast, student politics started to be accepted more and more by public as a nuisance to day to day activities, a hazard for safety and a source of insecurity. Their main function seemed to be to intimidate adversaries. Opponent was generally to be another political party. But, they were also found flexing muscle to same party fellow as a hired goon of a rival. They were to put public to jeopardy to extract money. Government party student front was observed to be involved increasingly in rent seeking, tender manipulation, land/ property grabbing etc. all sorts of public sufferings and corrupt practices with tacit protection of administration.
During Jatiyo Party (JP) rule, the then President Ershad once tried to put an end to this anti-people student politics. He called for voluntarily banning of student fronts of all political parties. As a gesture of authenticity he unilaterally disbanded ‘Nuton Bangla Chhatra Somaj (NBCS)’, student wing of ruling JP. Opposition parties out of their suspicion refused to follow. If accepted, student politics could go back to campus free from the clutches of political parties. Possibility of it be operated by students themselves with democratically elected leadership would have been better. This could have facilitated taking it back to its glorious role of past.
However, abolition of NBSC unilaterally did not do well for JP. Sudden reduction of muscle power and subsequent vacuum weakened its organizational structure. This is considered by many a major cause for fall of JP in the wake of opposition led movement. Opposition took advantage of this deficiency against superior muscle of their student wings.  Learning from this negative outcome, subsequent governments started invigorating their student fronts instead of abolishing it.
Solutions could be as follows;
1) All political parties should agree to discontinue their own student front at the same time. There could be youth fronts having country wide network to include young generation. This would supplement strength to party structure. This would also create openings for the youths to be involved and learn politics from an early age.
2) All educational institutions should be instructed to arrange for elections regularly free from influence of political parties to have democratically elected student leadership. The elected student representatives will take decisions, prepare work programme and arrange implementation with consent of students. This way they would develop mentality and skill of a responsible pro-people leader.  Students are the future of our nation. It is our responsibility to ensure that they can prepare themselves to build an ideal homeland. Practice of so called student politics a distorted political culture to have petty partisan and personal gain may bring disaster. Student politics should be made free from shackles   of party politics and returned to the student community.